It’s long been stated that a picture is worth a thousand words, although not as long as you would think. A quick glance at Wikipedia credits this saying to the early 20th Century advertising strategy, although similar sayings date back to the 18th & 19th Centuries. Whenever the origin, the sentiment is the same – an image tells a story. Some are simple tales, others write novels. But, in the end, inspiration is inspiration.

As I’ve struggled with creative writer’s block for a few years, I’ve decided to combine my passion for marijuana and words to create the new “writer’s unlock.” The mission is to find pictures that speak (to me, at least), then realistically, I’ll write between 500 and 1000 words to describe the image, or perhaps the emotion, or even just to simply donate the words it inspires.

My first attempt is the piece below I called, “Chaos of Nothing,” inspired by an image by Annie Louisa Swynnerton called Mater Triomphalis. I was riveted by this image as soon as I saw it at the Denver Art Museum during the “Her Paris – Women Artists in the Age of Impressionism,” (Dec 2017). From where my fascination for vintage female nudes stems, I am still unsure. Perhaps it’s because they represent confidence, and confidence begets freedom – for both, I continue to fight, as I struggle to maintain independence and individuality amidst, seemingly, infinite, restrictive social norms.

(NOTE: I will not research the artist’s intentions for the images I use. Although, I do believe there is value in hearing the artist’s thoughts and inspirations – learning about the politics of the time, etc.; in the end, I feel that art is best appreciated when the viewer has their own experience with the work.) 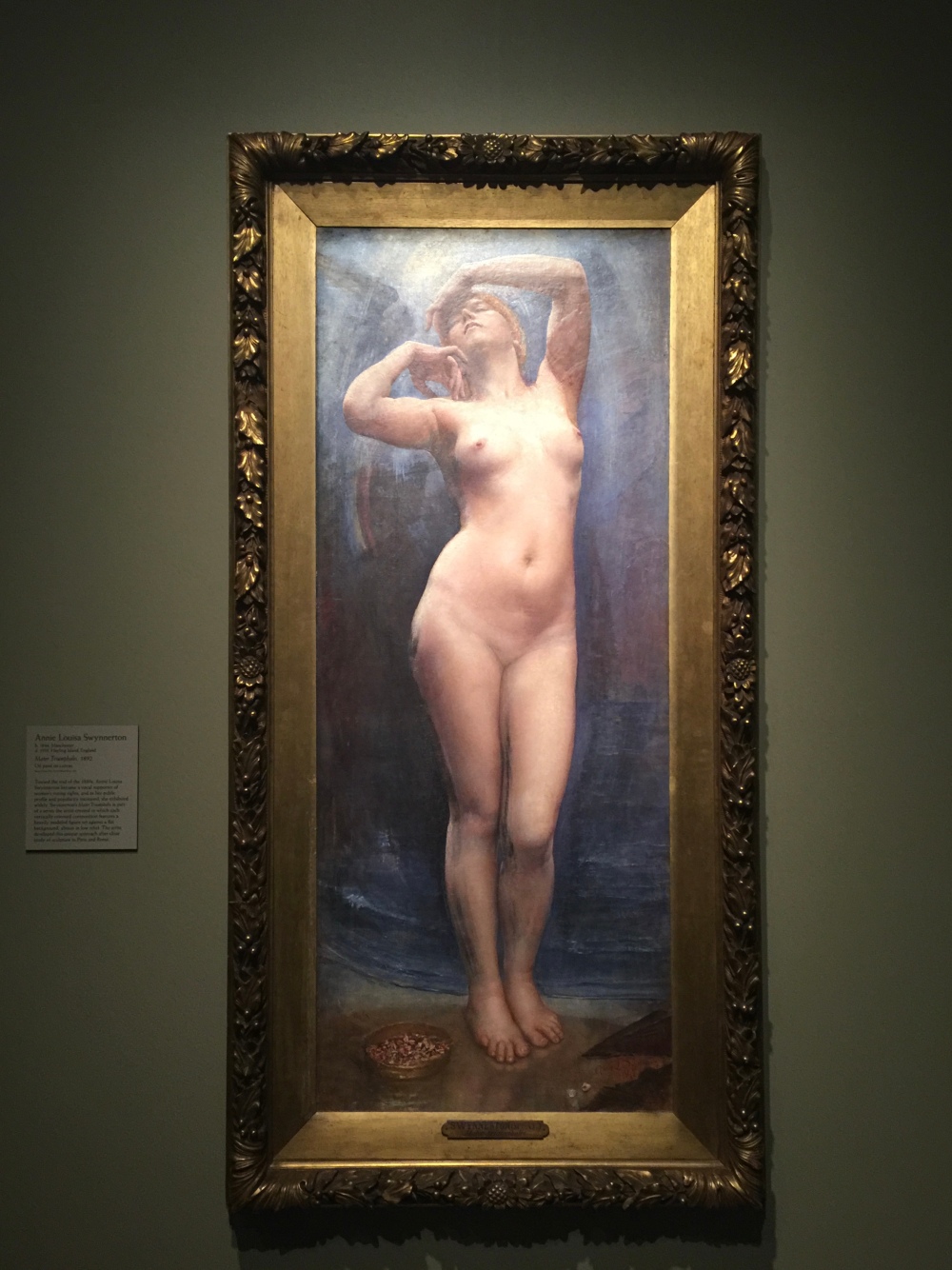 If we only could see that shrouded in glorious essence, the world stripped away, earthly energies converge, inspiring unity amidst the chaos that exists within any absence. Let this chaos be named “The Shadows,” for in the shadows, a place where everything and nothing exist in perfect balance, live the possibilities of endings, which are often called “resurrection.”

We give such little thought to what is behind, as we are constantly reminded to “never look back,” however, the back has its face, equal to its front.

As Venus tumbled to the shore, did she, at once, turn her back on the sea?

No matter the vantage, past or present, a shadow is always cast. Even Peter Pan knew that there was mystery in the shadow and, playful as it may be, the shadow is a tricky figure, ever-present, looming, waiting for exploration of its infinite abyss. Yet, we ignore the shadow in favor of the light, but fail to notice that it is equally as blinding. Rather than peer into the darkness that tirelessly follows, we draw the curtains, creating a darkness of choice, but instead of calling it “chosen darkness,” we refer to it as “reveling in the afterglow.” Each time the curtains drop, the shadow waits patiently for you to emerge from your selective blindness.

There is a carnal lust in all things we find beautiful. Yet, what is lust, lest the desire for exploration of what is hidden? Yet we do not lust for darkness, in fact, we flee. Often we fail to see that what we fear of the dark is equally its beauty. The seeker is a luminant vessel, whose light will cast shapes in the shadows, which will then create a new reality. You must be willing to explore the darkness, and shed the fear of potential loss; the rewards are sweeter and infinitely more satisfying. Perhaps the exploration of the light’s absence is where true intimacy awaits.

A radiant mind is the only baggage worth carrying in this life, as no journey exists without first facing the familiar darkness called “The Unknown.” For your journey, I would recommend a glowing lantern, as too much light yields only reflection of what you already know. It is the obscure which you seek, the place where the ceiling becomes the floor, but you walk with your hands.

You see, the mind is an intricate web of unknowns, itself. It would be a tremendous waste if we neglected to walk amidst its abyss. Isn’t that what we’re talking about, after all? Spending time in the layers of the unknown until it becomes familiar.